Oh look, it’s Monday again.  I don’t know why, but even though I got plenty of sleep, I did not want to get up this morning.  However, once I open my eyes, the cats sense it and start making a racket, so the snooze button is futile.

I thought it was supposed to be WARM today.  Sadly, I did not confirm this by looking at the actual weather.  Since it’s Oklahoma in the spring, that means I did not dress appropriately for the weather.  I’m pretty sure that’s going to be the case for the next 6 weeks, until it’s over 90 every day and the only appropriate outfit is one you can’t wear in public without getting arrested.

I wasn’t feeling terribly fancy today, so I decided to throw on my go-to ensemble of jeans and a black graphic tee:

The jeans are the same ones from a prior post: the 27″ Seine jeans in Distressed Black from Universal Standard in a 24.  The tee is from Torrid, and is still available in 00 and 1-4.  (I am wearing a 4.) I like this particular tee, as it’s a lighter weight than some of their other shirts, which is good for when it actually IS hot outside.  The shoes are Skechers Bobs in an 11.  I tried these on in a 10, but they were just a SMIDGE too short, and I had to scour the internets for weeks to find a pair in my size that were not stupidly expensive.  I mean, I *wanted* them, but not enough to drop full price on them.  Weirdly, Amazon still has a link to these…of course they’re “Currently Unavailable,” but I bought these at least 5 years ago.  A close up of the shoes:

I was TRYING to capture their color-changing properties, but apparently fluorescent lighting is not conducive to this.  SURPRISE SURPRISE.

I did get a closer view of the tee: 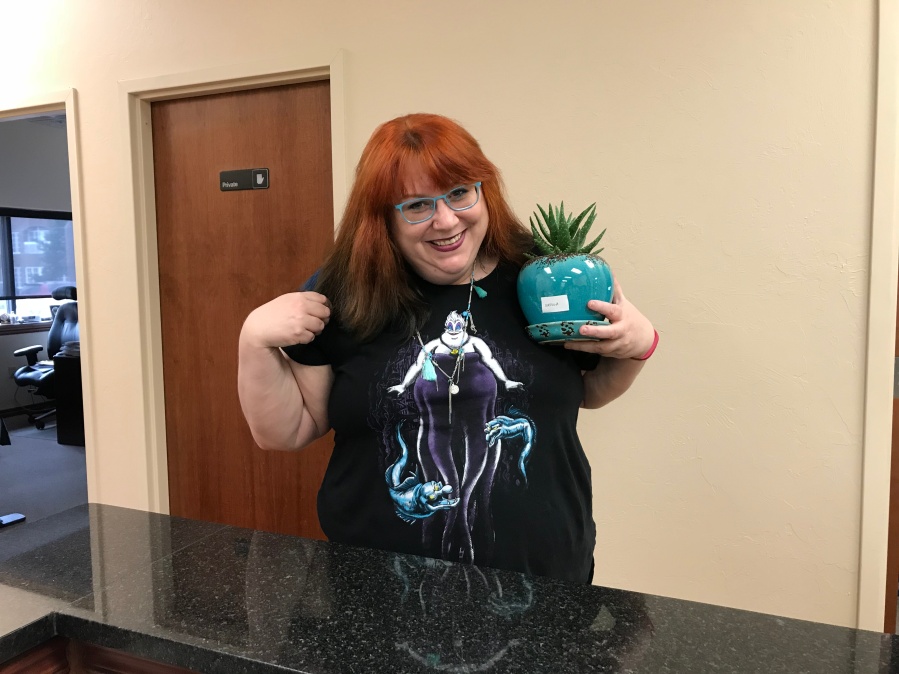 The plant is named Ursula.  You can see her name tag if you enlarge it a little.   The necklace is from Lane Bryant.  I thought I needed something, but I forgot this necklace is kind of dumb.  None of the attached dangly bits are heavy, so it moves around a lot.  I prefer the tassel front and center, but the necklace doesn’t give a shit.

Glasses are from Zenni, duh. I actually really like these. I wasn’t sure how I would feel about them, because they’re such a light color.  My feelings on light colors can be summed up as follows: 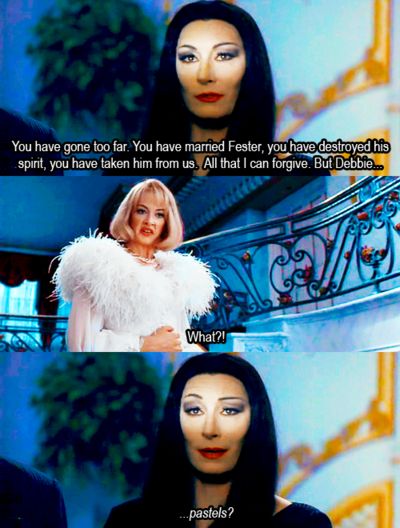 I guess these are more of a bright than a pastel, and they’re different than all my other ones.  My eyeliner actually matches them, but you probably can’t tell that.  That’s the one disadvantage to glasses & not contacts…my eye makeup doesn’t really show.  Also, I’m practically blind, and the light in my bathroom is ALREADY terrible, and I have to get about 3 inches from the mirror and then when I look down to get my glasses I have to physically bend down to find them.  I bought a little close-up mirror at Walmart, but it isn’t the greatest. The light is in the handle, so if you hold it, you’re covering the light. (If anyone has a recommendation for a lighted makeup mirror, please share.  Preferably a non-handheld version that isn’t expensive.  If I have a makeup mirror, I will not have an excuse for my utter failure to wear anything but eyeliner, mascara, and lipstick.  Pretty sure the last time I put on a full face was Christmas, and that’s because I knew my mom would take pictures.  (Also, my mom’s bathroom has LIGHT, and she has one of those wall-mounted close-up mirrors.  I would get one, but hers isn’t lighted because there are actual light fixtures in her bathroom. My cheap-ass apartment complex “remodeled” this apartment. In the process, they removed a REALLY BRIGHT 80’s STYLE light fixture with like five giant bulbs and replaced it with the light fixture you put in your guest bedroom that’s really just a place to dump all the shit you don’t know where else to put.  It has *one* bulb slot, which lights HALF the fixture, and thus, half the mirror. It sucks, because it’s a nice big mirror and vanity.  My significant other uses the other bathroom.  HIS has lights, but the mirror is teensy.)

The lipstick in the close-up is a different color than in the other pictures.  The brighter color is (I think) this one  but it’s hard to tell online.  In store, it’s the one that looks bright purple, when none of the other colors are even close.  It doesn’t stay on as well as some of my other favorites, but it was something different.  The second pics are one of my many Covergirl lipsticks, but I don’t remember which one.  Whichever one was in my purse.  My lipsticks are mostly all the same color anyway.  Oh sure, the labels say something else, but it’s bullshit.  I have chosen two VERY DIFFERENT shades of burgundy.  One is much deeper than the other.

4 thoughts on “I’m a very busy woman, and I haven’t got all day”