I’ve spent the last month stalking vintage Dr. Martens sandals on Poshmark and eBay.  I had a pair way back in the day, but I wore them into oblivion, and plus, I didn’t like the color of those to begin with…but they were the ones at Famous Footwear I could afford.  Of course, when I did find the “right” sandals, I ordered a pair that were the size I wore in college.

That pair will likely be on Poshmark soon.

I FINALLY found the right pair in the right size, and miracle of all miracles, they looked barely worn and were $15.

So of course I wore them today, even though it was kinda chilly this morning.  Not that it was chilly in our apartment.  Our a/c is still completely fucked.  “Still” as in last summer, it was screwed.  The maintenance dudes were here almost every other day, trying to perform CPR on a dead-ass unit….a dead-ass unit that was too small for the apartment.  (According to Google, our square footage was slightly above the range for that size unit.  I emailed all this to management last summer, and also pointed out that it was 25 years old, not energy efficient, and that it was time to get a new one. They finally, in August, after three months of electric bills in the $400 range, said “fine we’ll replace it.”  The AC guy said it would take two days: one to install the outside part, and one to install the inside part.

They only replaced the outside part (a/k/a the condenser).

I let it go, mostly, because at least it wasn’t 85 in our apartment and it was gaining on fall.  But a couple of months ago, I emailed the manager to ask when the REST of my new AC unit would be installed.

She contacted her supervisor.  Nada.

It got warmer.  Our AC didn’t work when we tried it.  Another email and another tweak.

Finally, earlier this week, when I dropped off the rent, I had a serious conversation with the manager about it.  This isn’t her fault….she’s not the one who can approve expenses.  Basically, she just has to listen to everyone bitch and convey the bitching further down the line.  She said when she forwarded my last email to her supervisor – the one where I said our unit kept freezing up even though it wasn’t set that low – her supervisor said we turned it on when it was too cold outside and it was our fault.

It was over 70 outside, which means it’s hotter than that in here.  Our windows don’t open for shit because they have old, crappy storm windows that have broken latches and broken tracks.  It’s impossible to cool off via door/windows open once it gets above 75.  The only thing that will drop the temp at that point is very cold weather outside.

I told our manager that the supervisor’s response was not acceptable, that we had been promised a new unit last summer, and that I wasn’t going away.  She said she’d email again, but that I could also email corporate.

When the stupid AC quit again yesterday….I did.

It wasn’t a very nice email.  It basically said that (1) we’d been dealing with this bullshit for almost a year; (2) we were not planning on another summer of $400 bills just to keep the place at 80 instead of 95; (3) that I had the feeling if our unit was all bills paid (which some in the complex are), it would have been replaced last June; and (4) it needed to get fixed, now.

Welp.  That prompted some exceedingly ass-kissy texts from maintenance and management.  I’m not mad at them, which I told them.  I’m just irritated that I have to put on my Bitch Pants and act like an asshole in order for them to honor the lease and/or the Landlord/Tenant Act.

Today, another maintenance dude brought us two window units and said our new AC was on order and should be installed next week.

I’ll believe it when it’s here.

So that’s partly why, even though it was kinda cool this morning, I was okay with dressing inappropriately….because it was hot inside. 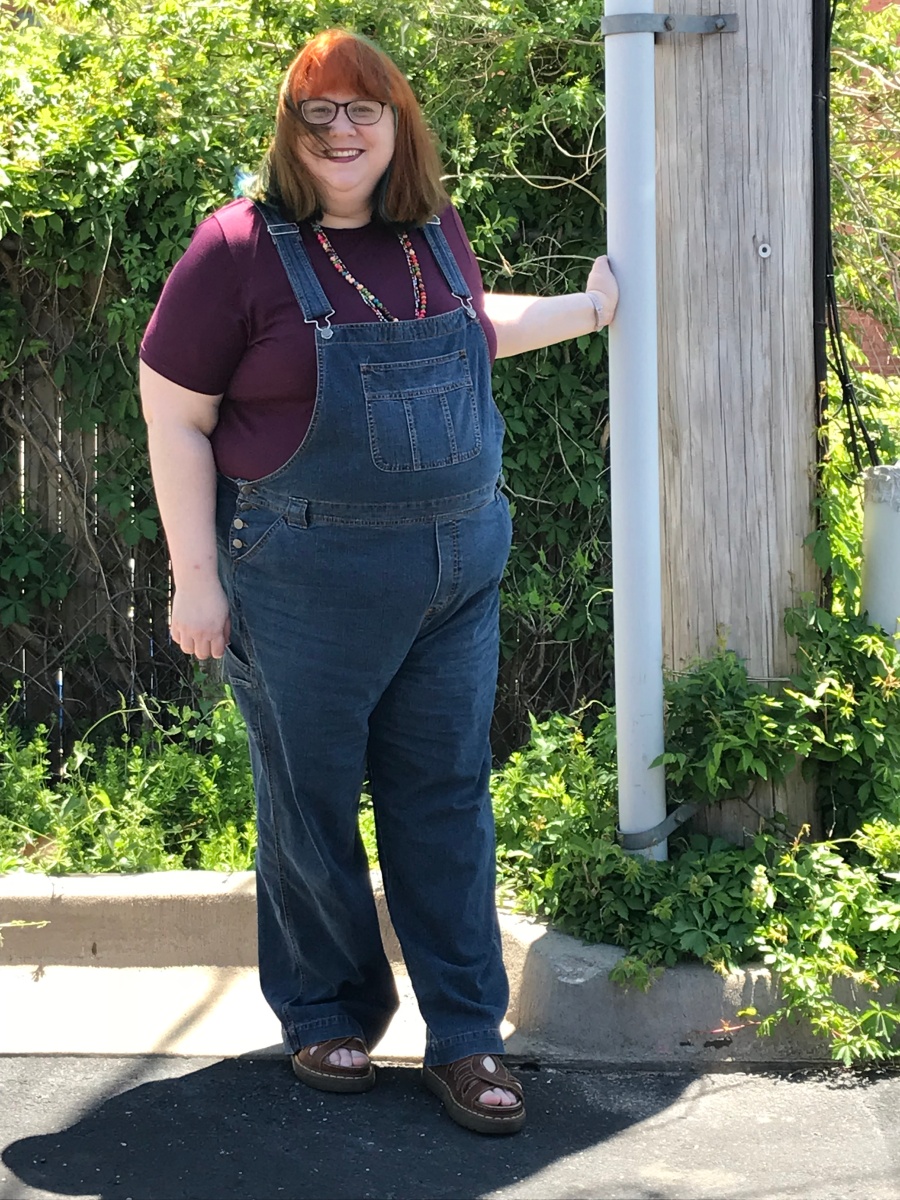 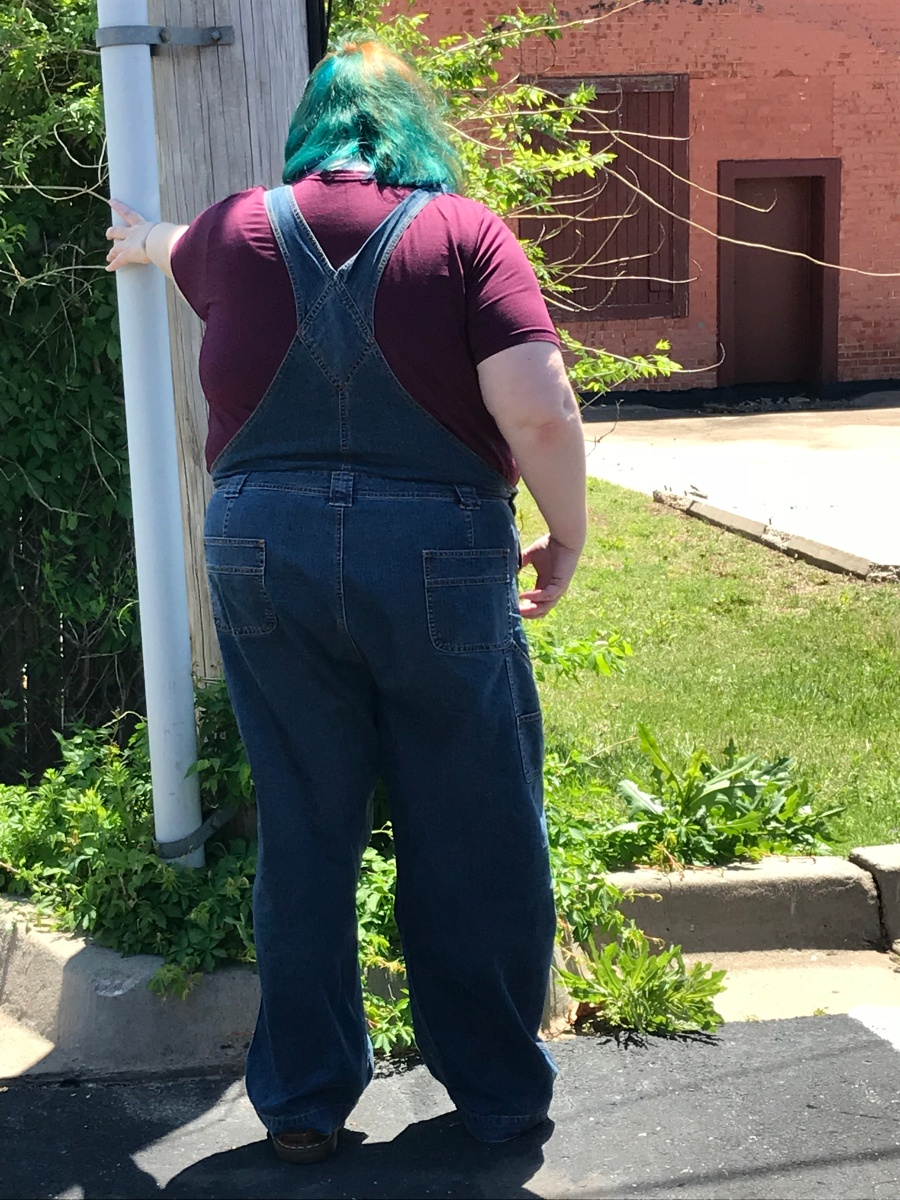 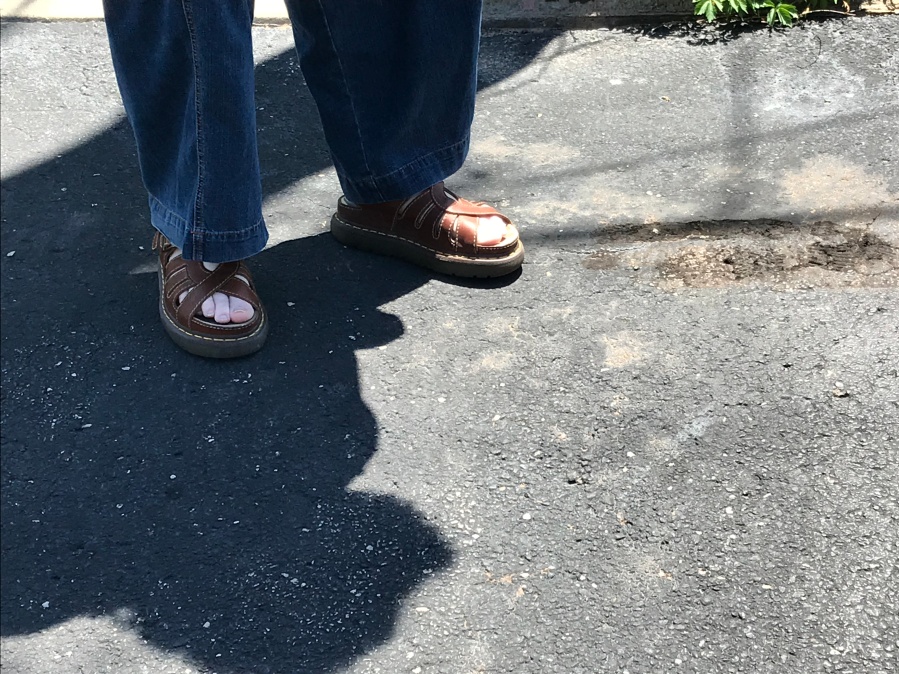 Overalls and shoes are (1) The Store That Is Dead to Me via eBay; and (2) Dr. Martens, via eBay.  The shirt is the Tee Rex in Eggplant from Universal Standard, size XL (26/28).  The necklaces are cheap-ass beads from the Dollar Jewelry store.  (All three strands cost $1, total.)  Hey, if I’m going 90’s, beads were kind of a thing back then.  There was a store in Norman called “The Beadery” where you could go make necklaces.  It was a cool concept, because making a necklace or two is fun, but buying supplies to make a lot of necklaces tends to be cost-prohibitive.

I am also kind of weirded out, because I just found out that someone from my high school class died.  I don’t know what the circumstances were.  We weren’t best friends, but she was in the circle of people I knew.  I saw her a few years ago at Christmas – I had a stomach virus, and she was the PA at the walk-in clinic down the street from my mom’s house.

It’s depressing and fucked up.  Maybe that’s why I’m tired.