In case anyone wondered where my post titles originate — they’re all song lyrics (except WTF Wednesdays).  Sometimes a song is stuck in my head all day.  Sometimes it’s what I hear in the car.  Sometimes I have to page through my (extensive) music library for just the right thing to sum up my mood.  But I can’t write the post until I decide on a title.  I have no idea why.  I can know what I want to write ABOUT, but for me, the title seems to unlock the actual writing.

I never claimed to be normal.

Today was a Monday filled with conference calls and high-maintenance shit.  I love it when I email a client something, call to ask them if they got it, get a “no, I haven’t checked it,” and then get 5 phone calls and an appointment request about something self-explanatory.  As in “read this and tell me if it’s correct.”

The conference call was another one on the same case as the one last week.  I’ve been typing up my notes and giving them bullshit ratings.  The past two calls received 10/10 and 11/10, but today’s only got 6/10.  We’re making progress.  Sadly, they were with two different sets of attorneys on two (sort of) different issues, but since they were largely pointing fingers at one another, at least a “we MIGHT give you stuff” is an improvement.

In the last few months, I have bought a couple of semi-fancy pens.  Not FANCY, really, just allegedly more ergonomic and easier on my aching hands.  I’ve decided the one I used today is not acceptable for extended note-taking.  Today’s is this one, and based on the way I hold a pen, the ergonomic gel part is in the wrong place, so my hand hurts from where the pointy edges rub.  Even though this one doesn’t have gel refills and I think the point is too broad (I like really fine-point pens), it is MUCH more comfortable for writing.

I have no official hand diagnosis, but sometimes my hands are all clawed up in the morning, and they ache rather frequently.  The clawed-up thing doesn’t happen as much since I’m more careful about my arm positioning when I’m on the computer and have ergonomic keyboards and mice.  Still, however, a job and hobbies full of banging on a keyboard are not exactly conducive to happy hands.  This is why I don’t play a lot of console games….the controllers kill me.  Also, a lot of the newer games are either (1) stupid shooting games, (2) basically the same game as World of Warcraft, just with different names for the races and continents, or (3) make me nauseous.  I get motion-sick in the backseat of a car.  (Get your minds out of the gutter.  I mean sitting in the backseat while someone is driving the car.  I was going to use the word “riding,” but I realized that didn’t actually help.)

The first-person camera motion plus 3D graphics are beautiful, but it sometimes makes me a little sick.  As far as other games being the same as WoW, don’t @ me.  They are the same game.  They’re all the same game.  You can call the elves whatever the fuck you want, or have cat people instead of pandas, or be in space in futuresuits instead of the more magical/fantasy feel, but you’re still making a character and going on quests and accumulating money and stuffs and trying to upgrade blah blah blah.   I decided I’d just stick with the game where I had money and stuffs instead of learning a new one that would be buggy for months because they rushed to release it ahead of a WoW expansion.  (Why yes I am discussing Warhammer Online.)  I’m sure there are cool things about lots of games, but I’d rather spend my free time actually killing things with fire than learning how to play a new game.  Also?  All the stereotypes about who plays online RPG’s are not really…true.  I’ve been playing WoW since 2006.  During that time, my guild leaders have been mostly female; probably at least half the people I play with (if not more) are female; they’re mostly around my age, give or take; there are gay people; most of the people have jobs or family obligations; and basically, the “teenager in parent’s basement” really isn’t a thing I’ve dealt with on a regular basis.  As long as you just keep the general and trade chat channels turned off, you can socialize with the people of your choice.

If you decide to use the random group-finders, though, you see that maybe there are some true stereotypes.  This is particularly true if you use them in the player-vs-player area.

But, like anything in life, it takes a long time to get rid of misconceptions.  As far as video games are concerned, I think manufacturers are starting to take female gamers a little more seriously (or at least acknowledge they exist).  It would be nice to have some more realistic character models, and some armor that doesn’t look like a chainmail bikini, and less catering to the lowest common denominator.  (Side note/book recommendation for dork smut:  Brenna Aubrey has a book series that has its roots in the geek/gaming community, starting with “At Any Price.”  The first three books can be purchased here, although the first book is free on Kindle and they’re also available through many library ebook programs.  Anyway, the main character bitches about female armor in games, etc.  They’re definitely “romance” novels, but they’re at least set in a modern era and have a decent story.)

Blah blah blah shut up and post your outfit, nerd.

NOT YET.  Everyone is so IMPATIENT.

First, I have to show you my bent heating pad plug.  I think this happened when I accidentally jerked it out of the socket because the cord was all tangled around the base of my desk chair.  But until the last few days, it’s been fine.  However, it’s now started not really staying in the outlet, which means I have to unplug it and plug it back in every 10 minutes and ain’t nobody got time for that. 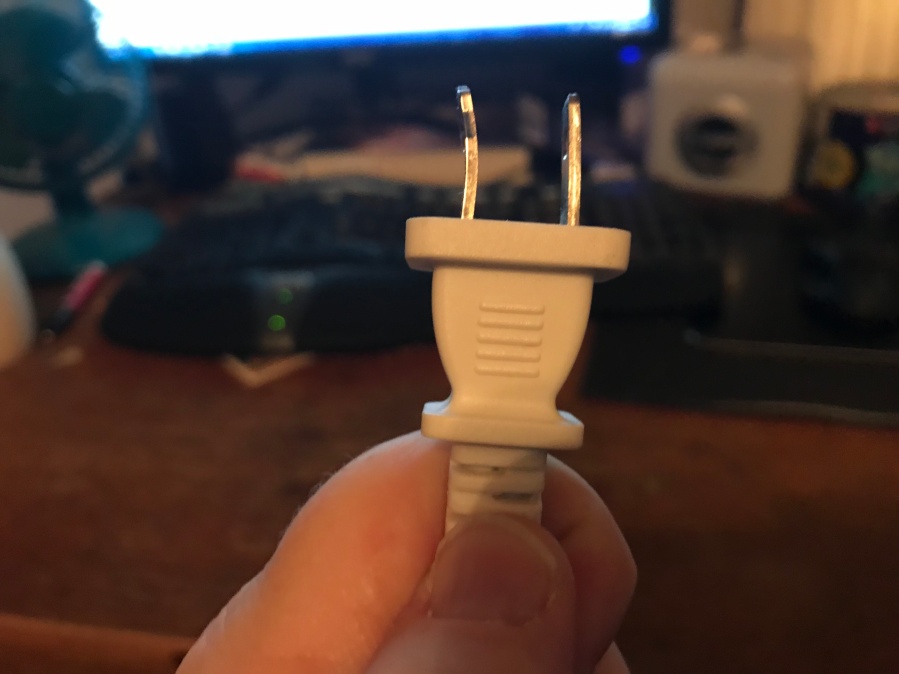 My first thought was that it was broken and I needed a new one.  But it’s not BROKEN, just bent, and it can learn to love again.  Therefore, I busted out my awesome nerd tool set: 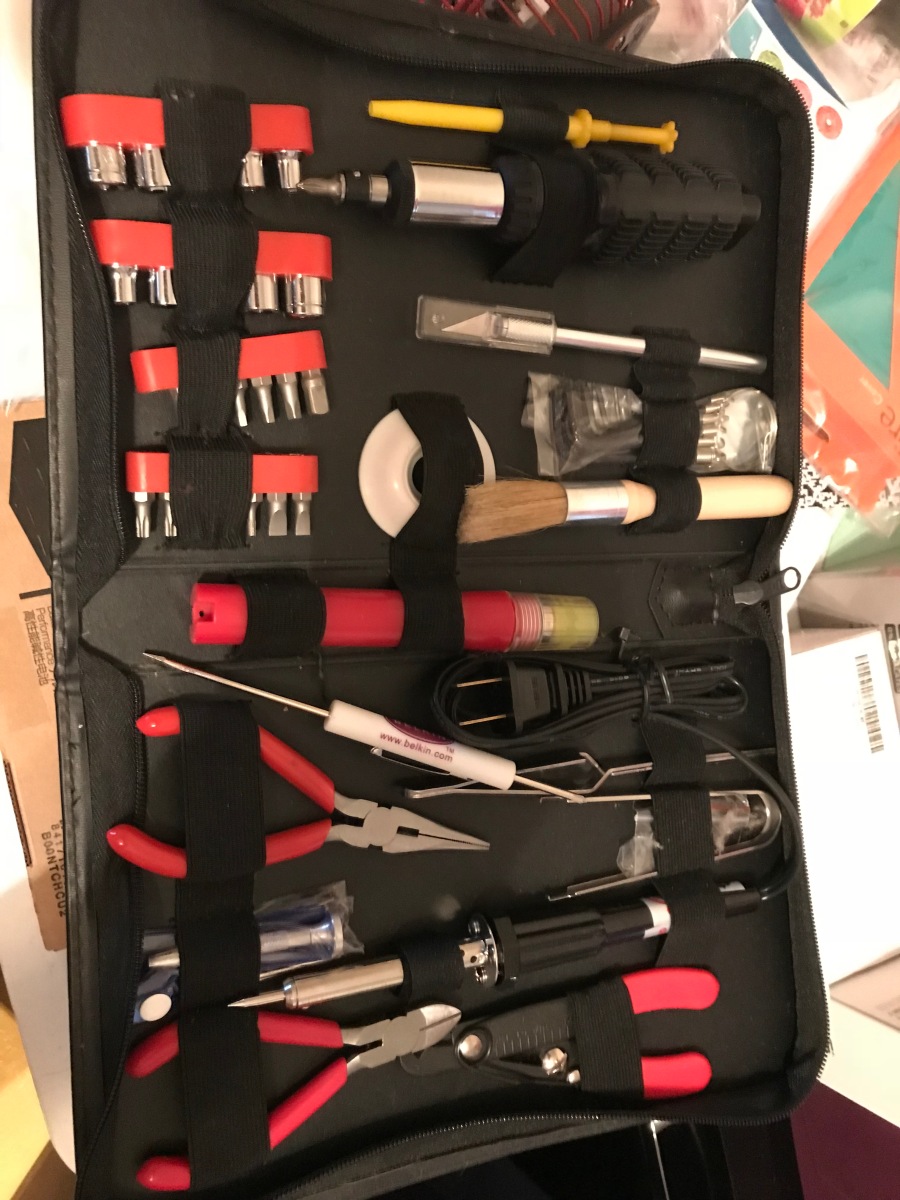 Which has everything you need to fix your computer and various other household items, except a halfway-decent flashlight.  All the reviews mentioned that the flashlight sucked, but everything else was great.  So far, this is true.  I’m just sad I haven’t had any reason to use the soldering iron.  Seeing as I can’t even glue on fake nails or put labels on envelopes without fucking it up, I probably don’t really NEED to work with hot metal, but COME ON.  This kit was a gift, but I believe you can buy your own here.  (They probably have it other places, too.  That was just the first link.)

I fixed the plug.  I have also replaced a video card or five, a heat sink, a power supply, and a case fan.  Zooey is doing her level best to break this case fan, too.  She sits on my computer and fluffs right into the case, which is vented on top.  Usually she does this after I tell her to stop walking on the keyboard during a boss fight.

Thank you for your patience, and here are the clothes pictures.

It was windy this afternoon.  My hand positioning has more to do with keeping my shirt from flying up than anything else.

Shirt & jeans are from Torrid.  The jeans are the same medium-wash-non-premium ones I wear every day.  The shirt is no longer available, sadly.  It’s from their “Super Soft” collection, and it is very soft. I also like that it doesn’t have a super-low neckline.  Not all fat girls have big knockers, Torrid.  Sometimes we have smaller knockers and then our shirts droop and we have to wear dumb tank tops even when it’s hot outside.  And sometimes even if we find a bra that MAKES us have rather prominent gazombas, we don’t necessarily want to display them at work.

People were bitching about the ruffle, because it shows the back of the fabric, but I think it’s just a nice casual touch.

The shoes are Comfortiva flats, which I got for about half what Amazon’s price is on Zulily.  The elastic bands on top laid funny at first, but as the day went on, they mostly arranged themselves acceptably.  The heels have elastic, so they’re not blister-ridden…although they did rub right on the below-big-toe-bone on my right foot.  Pretty much ALL flats do this at first.  These are an 11 C/D.  I’m not wearing socks.  I tried, but they wadded up in my shoes and I tossed them in the garbage.  I have had quite enough of no-show “liner” socks.  The ones designed more for athletic shoes SOMETIMES work, but the little ones? Ugh.  (The Peds brand also was okay, for a couple of washings, but then the silicone on the heel got unsticky and right under my instep they went.  At least they acknowledge that people with bigger feets need bigger shoe liner socks.)

I took a face selfie, because I had a couple of minutes to kill before the conference call and I didn’t have time to start anything.

You know, I thought my bang-flippy issue was due to my self-trim technique, but I haven’t touched them since I got my hair done and they’re STILL flipping.  I think it’s just an example of my hair being just wavy enough to be annoying.  (If it’s glasses related, it should be BOTH sides, but it’s not.  It’s just my stupid hair.)  I’m not trimming them again until I get my eyebrows waxed because holy hairballs they’re out of hand.

I guess I should be glad I don’t have to draw them on.  They would always be crooked and people would think I was suspicious of everything they said.

Maybe that’s not far off the mark.

6 thoughts on “The spotlight’s hitting something”