Somehow, I managed not to get official photos of today’s outfit.  Well, not “somehow.”  I got stuck on a series of totally pointless conference calls (I am the official note taker.  Also my boss and I take turns making obscene gestures at the phone, including, but not limited to, the jerk-off motion), and my photographer quite reasonably bailed before someone gave her something else to do.

My outfit was boring anyway.

But my loungewear is cute.  It has rainbows.  There’s also some trash that the cat was playing with, which I probably should go pick up, but then she’ll just pull it out of the trash can (or find something else that isn’t a cat toy). 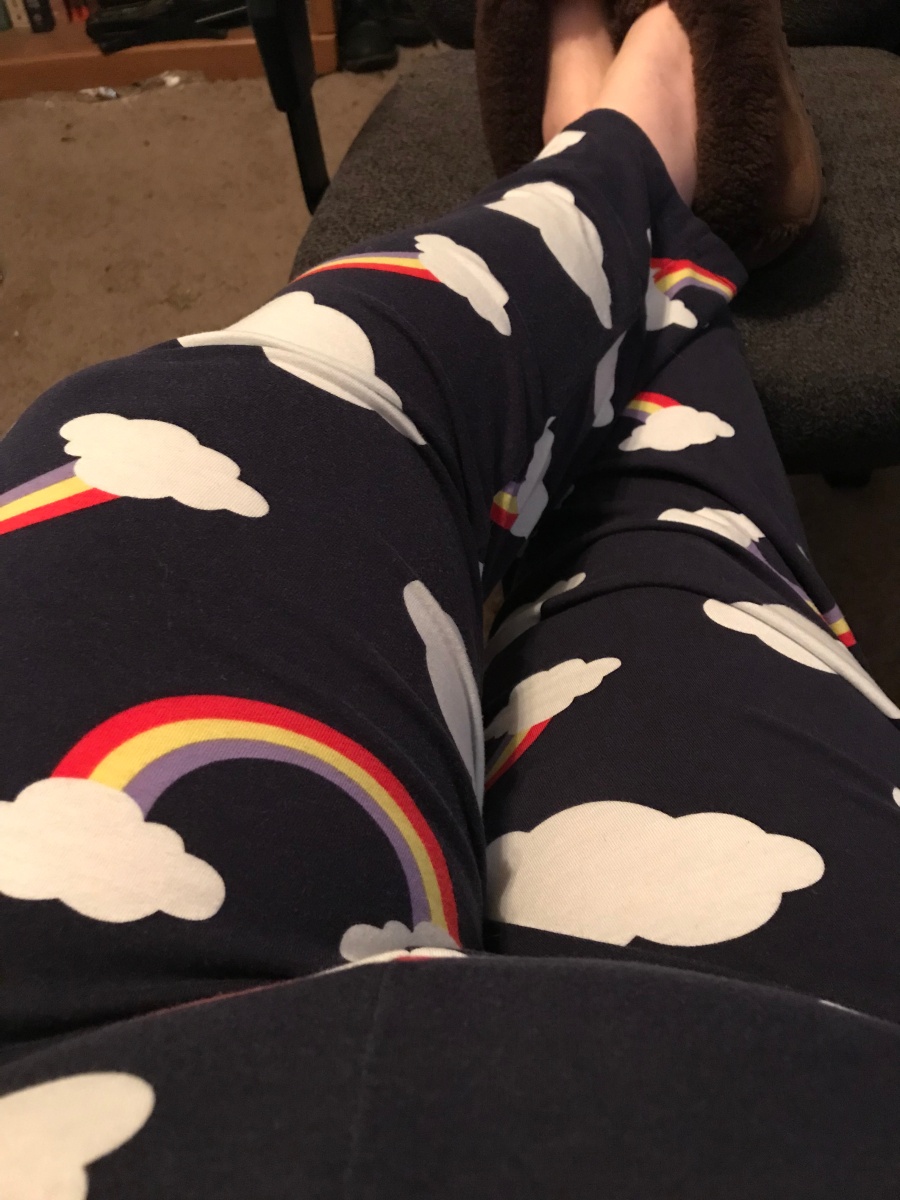 These are from ASOS Curve.  They don’t have these exact ones, but they do have another pair with rainbows.  I thought about that pair, but (1) they were more expensive, and (2) they have to be line dried, and they wrinkle.  I have another pair like them, and I have a hard time because I feel they need ironing but if I’m not going to iron my regular clothes, I am sure as fuck not ironing sleepwear.  However, the fabric is super lightweight, which is a bonus for those of us who have whacked-out female hormones.

However, since yesterday was WTF Wednesday, I do have yesterday’s outfit for your viewing pleasure.  I had to be somewhat presentable yesterday.  I had to go videotape an Independent Medical Examination of one of our clients.  These are typically done in higher-dollar car wreck cases and/or cases where the defense thinks the plaintiff is malingering, faking, or has prior injuries.  They are also done when the defense lawyer is a fucking pain in the ass, which was the case here.  I didn’t have to dress up, exactly, but I needed to wear something that wasn’t a t-shirt saying Parental Advisory: Explicit Content (which might be what I wore today). 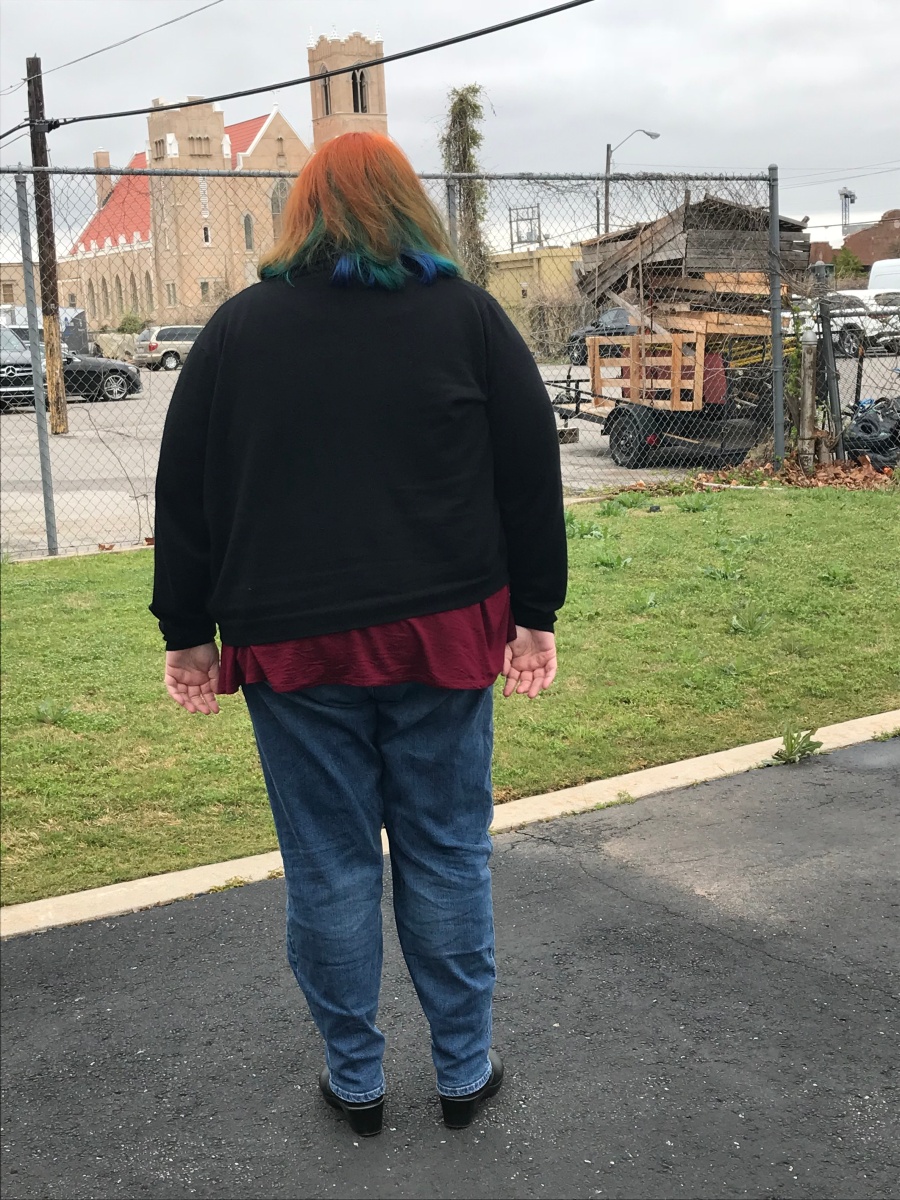 I’ve basically worn this before, except with a different tank top (same style, different color).

Tank:  ASOS Curve, US 24 (they don’t have this exact kind anymore – of course they don’t, because I like them – but they do have a similar one).

I hate all my socks. I rescind my recommendation for Dr. Scholl’s ones.  They’ve started creeping.  Every pair of socks I have worn with every pair of shoes for the last week has been creeping.  I am ready for Not Socks Weather.  (It keeps fluctuating, and it’s cold in the mornings, and I really hate wearing shoes without socks.)

So if anyone has any recommendations for socks, regular or no-show, that will stay on my size 10.5 wide feet, please share.

Good news: I found out yesterday that my pain management doctor is fully on board with medical marijuana if the state question passes in June.  But then he circumvented his staff for check out, and they forgot to call in my prescription.  Luckily, I wasn’t all the way out of meds and I have his assistant’s email, but I didn’t find out until I went to the pharmacy this afternoon before the stupid conference calls.

Bad news:  Fucking Walmart and their fucking incompetent oil change techs.  I hate taking my car there, but it was making lawnmower noises and really needed an oil change, and I had to get groceries, and I thought I would just suck it up and get it done.  Well, the receipt said they checked my power steering fluid, right?  Negative.  What I think they DID was knock whatever cap is on the bottom of the car off.  My steering was all grindy and annoying.  I took it back, and the guy wiped off all the caps and said, nope, I don’t think they checked it.  So he filled it up.  And it’s been fine for a week or two…but today it’s being grindy again.  So the question is: do I take it to the real mechanic, or do I just buy another bottle of power steering fluid?  Before you make your decision, this car is 17 years old and I really don’t want to put a bunch of money in it, and I also really don’t want to buy a new car right now, and every time I take it to the real mechanic, they find something expensive wrong, generally involving some sort of “gasket.”  If a mechanic says “gasket,” you might as well just brace yourself, Bridget.

I wonder if the convenience store sells power steering fluid, so I don’t have to go to the actual auto parts store (or back to Walmart right now either).  I know if I take it back and tell them they did it, I’ll get blank looks and a bunch of bullshit, which is what happened the LAST time they touched my car.  I should learn not to combine errands.  Sadly, Walmart has the closest three grocery stores to here.  I would much rather Super Target, but those are in the suburbs where rich people live.  Rich people live in our neighborhood, too, but there aren’t a lot of places big enough for a big-box store.  I heard a rumor about Whole Foods, and the nasty old grocery store is finally remodeling, but those things are not immediate solutions and I really don’t want to drive 30 minutes to get groceries because this entire city is a sea of orange cones and detour signs.  Also, I don’t think Prime Pantry is a good idea, since our apartment complex does the stupid package locker system.  (If they would deliver to my door, I would totally order everything heavy online.  Shit rocks for the cats.  Soda for Lendon.  Canned goods.  Milk.  I might even buy bottled water.)  However, the stupid package lockers are in another building, and that completely defeats the purpose.

Our apartment complex is made up of three wildly disparate areas:  a historical-type hotel converted to apartments that’s 6 stories; another building of apartments and townhouses that’s sort of Spanish-style, and then the rest of the buildings, which are your typical late 60’s-early 70’s generic apartments.  The high-rise requires a passcode to get in…and yet, that’s where all the people steal things – including every single barbell in the fitness room (even the 75-lb ones).  Do we get cameras? OF COURSE NOT.  We get a freaking package locker system that is not convenient for anyone else, even though NONE OF THE OTHER BUILDINGS HAD ISSUES even though they’re out in the open.

At least they quit charging us for it.  (Originally, when they installed it?  We were supposed to pay $4.99 a month for it.  Within the first month, they made it free, because I don’t think the manager could deal with anything else besides people complaining.)

3 thoughts on “Spent my nights awake and I wondered”