Zooey the Assface decided that human sleep was overrated again last night.  Then, this morning, she was snuggling, and something startled her, and she launched into orbit and took a part of my arm with her.  Here, she is gazing with suspicion at the front door because she heard the lawn guys:

Despite my sleep-deprived urge to wear something as black as I feel on the inside, I decided to wear overalls instead so I could wear my clogs.  I mean, yes, I *could* wear them with something black, but the boots match better, and I had a doctor’s appointment this morning, and even though it’s just a “hi, I’m not a drug-addicted hooker, plz refill anxiety meds, see you in 90 days” appointment, they still insist upon the scale, and I really didn’t feel like screwing around with taking off boots and yeah right like I’mma get on the scale in them?  Maybe in Crocs, but not in Docs.

That was a really long sentence.

Here’s what I threw together: 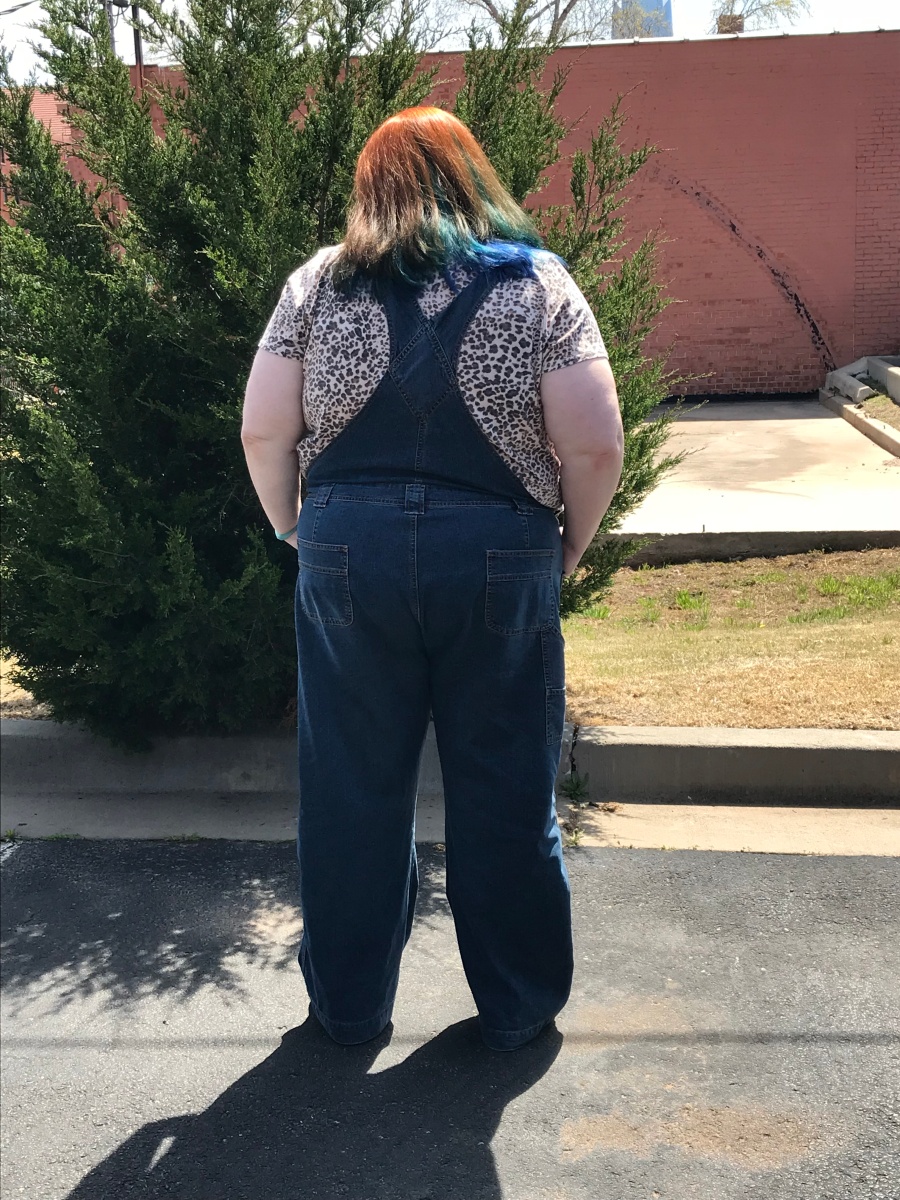 Vintage overalls from The Store That is Dead to Me.  (Read this post for why they are dead, if you care.)  T-shirt is from Torrid, and is still available in sizes 0-4 and 6 (I’m wearing a 4), and is on clearance, which is why I bought it in the first place.  (I ended up paying $22 for two shirts.  I don’t know why it’s more than that now, but I might have had a reward coupon.  I hate that their clearance prices fluctuate and that they sometimes play the “we’ll mark it down $5 and call it clearance” game.  Old Navy also plays this game, especially in plus sizes.)  Shoes are my Sanita doctor clogs for the reasons stated above.  I didn’t really do anything for accessories today.

I did, however, make an appointment for a haircut on Thursday.  My hair is driving me nucking futs.  I’m pretty sure I use a whole bottle of conditioner in a week.  The ends are all dead.  It takes too long to dry.  I was going to try to make it through the summer for the ease of the ponytail, but I cannot deal with it anymore.  I’m not talking pixie cut or anything that insane, but probably shoulder length.  Enough to get rid of the yucky ends (it only looks shiny because of the copious application of Biosilk Original Silk Therapy and It’s a 10 Miracle Leave-In Treatment. As you will note, these are not inexpensive (although sometimes you can find better deals on It’s a 10). When my hair is not a giant wad of annoying, I usually don’t use this stuff that fast. The big bottle of Biosilk lasts at least a year and the It’s a 10 is good for 6 months, but the current bottles are disappearing at warp speed.

I haven’t decided on the color arrangement yet. I’ll probably keep the existing colors, but I might play with the configuration a little. I just really want to be able to run a comb through the ends without it getting snarled.

And not to spend half my paycheck on hair products.

2 thoughts on “While we’re wide awake”