Blogging most of my outfits has made me aware of what I’m wearing in a different way. Don’t get me wrong, I’m the worst about staring at my closet for 20 minutes trying to figure out what to wear to work, or to a dinner out, or to the fucking grocery store. But now I’ve been fighting between my desire to present new! and exciting! content and my more than occasional desire not to stand out.

I could pretend I don’t know why my wardrobe has slowly turned blacker and blacker over the years, but I do know. It’s because getting older is fucking with my head, it’s because I have this sense of taking up too much space, it’s because I don’t really like what I see in the mirror but it’s so hard to change that.

And I also didn’t really want to think about why my world has gotten smaller…but two words: chronic pain. Since roughly 2008, my back has been fucked up to a greater or lesser degree. And since about 2012, it’s never really *stopped* hurting. There are good days. There are bad days. The surgery cut my pain level roughly in half, but that’s from a 9 to a 4.5, not to a zero. I don’t want to medicate enough to be completely pain-free (if that’s even possible), because I need to be able to function. But the constant pain makes it really difficult to do anything beyond the bare minimum adulting. It’s hard to make plans to be social, because I don’t know if I can handle whatever the activity is. Sometimes it’s fine, others it’s not, but even when I do go anywhere, I have this constant feeling I’m holding other people back, that I’m holding up the line, that I’m ruining everyone else’s fun.

I hate feeling this way. But until there are more advances in treatment that insurance will pay for (they’re doing some cool shit with stem cells, but that’s $30K and my insurance doesn’t think it’s valid. FUCK YOU BLUE CROSS BLUE SHIELD), there’s not much I can do.

Coupled with the pain is the depression and anxiety. Between that fun trifecta, sometimes leaving the house is nearly impossible. So the last thing I want in an outfit is anything uncomfortable, anything that requires shoes that hurt, anything that might make someone look at me.

But now I’m just letting it all hang out there. I’ve posted my sizes and measurements, and I am very committed to cutting the bullshit. So when I was pulling out something kind of cute this morning, I just….couldn’t. Today’s a bad pain day. Since the zapped the left side nerves, the right side hurts more (or I just actually NOTICE it more). I just did not have the energy to try something new. So, this is what I wore: 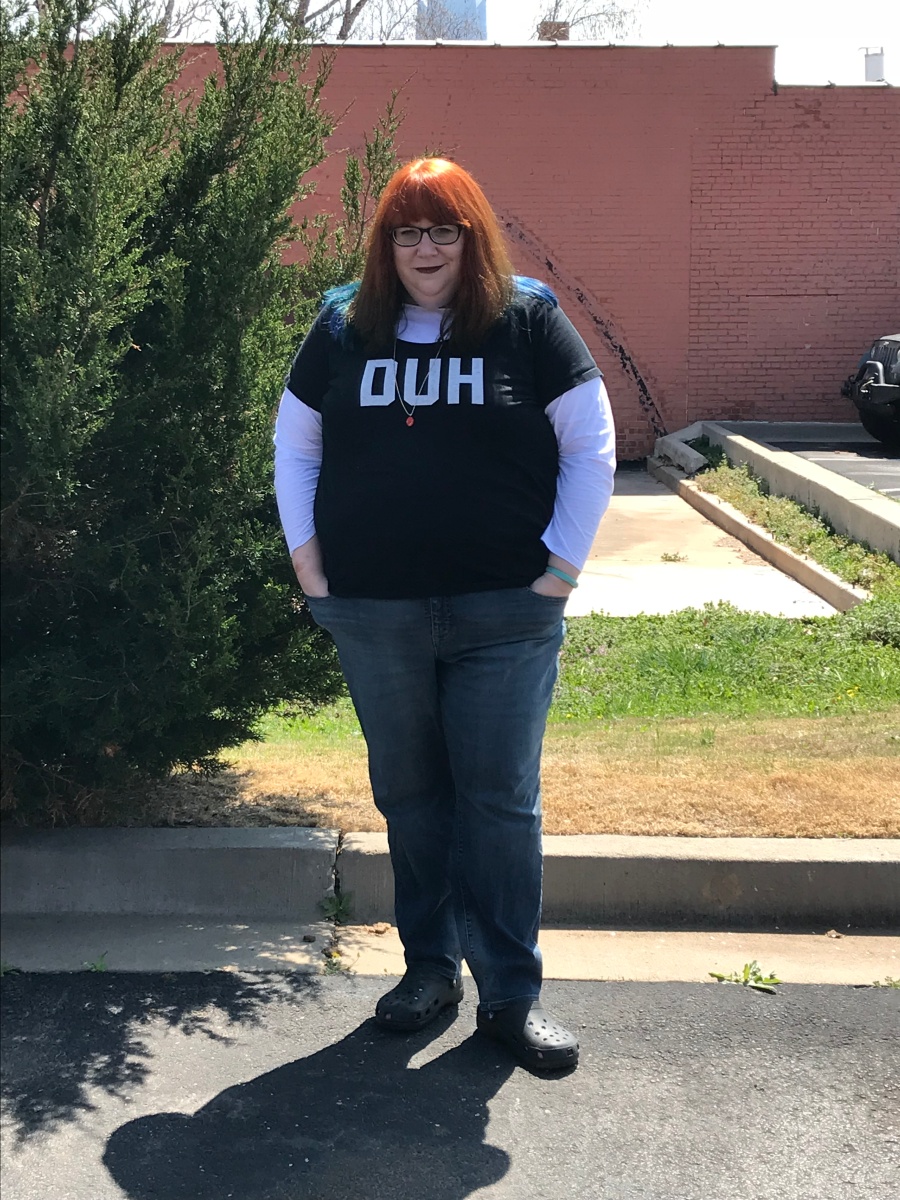 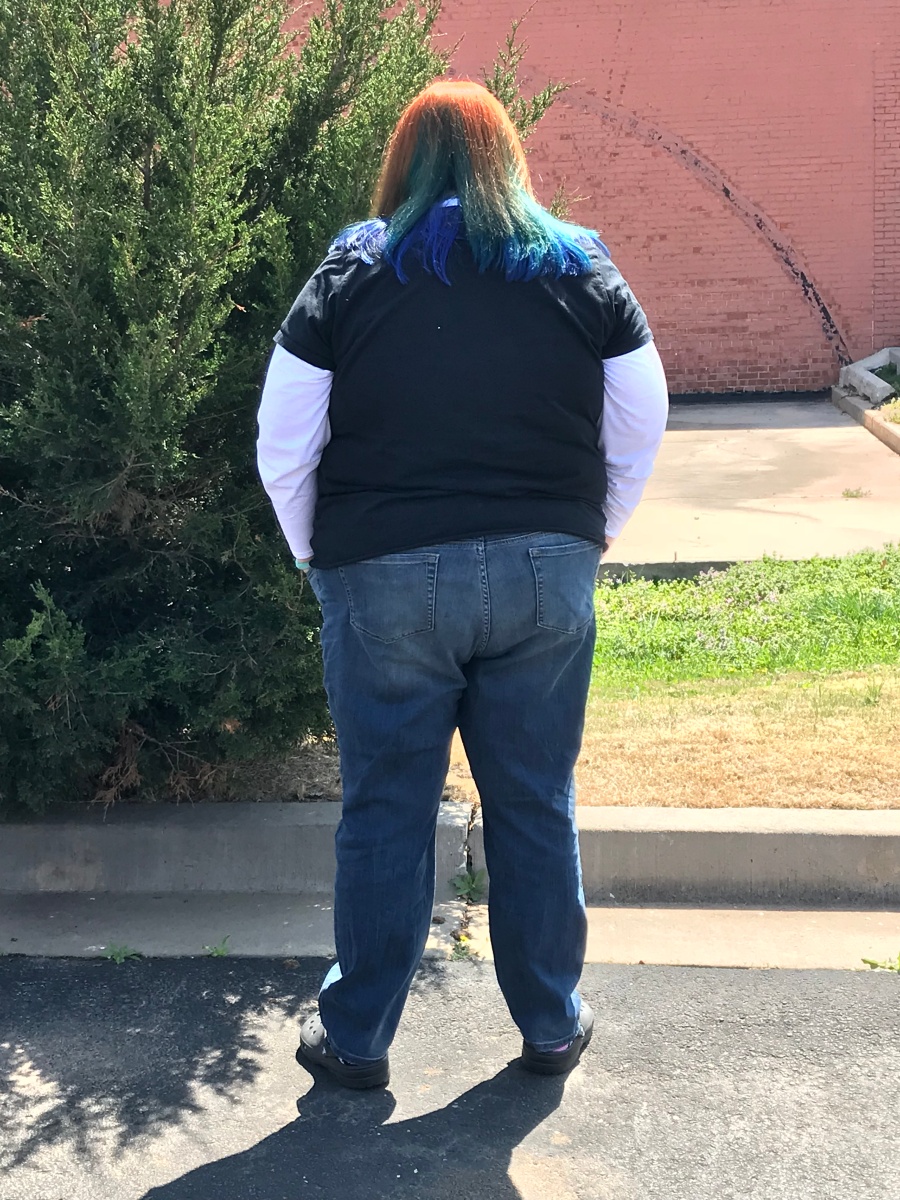 My favorite graphic tee at present:  Torrid.  They don’t have this one anymore.  Sorry.  White underneath tee is from ASOS Curve and also out of stock, but I wouldn’t buy it again because it shrunk when I washed it.  It’s still long enough to stay tucked in, but the sleeves are now too short.  I don’t even really like the sleeves anyway because they have dropped shoulders, and dropped shoulder seams are one of my pet peeves.  It’s like, let’s make a seam that hits RIGHT AT THE WIDEST PART OF YOUR BODY.  It makes your shoulders look huge, your midsection look huge, and generally just looks kind of sloppy.  They try to sell this as a “boyfriend” look but if I wanted a men’s t-shirt I would go buy one.  I have to sometimes anyway for nerd shirts, because certain websites (like Jinx and to a large degree ThinkGeek) do not seem to acknowledge that fat girl nerds are a thing.  Their men’s shirts go to a 4x, but their women’s are a junior 2x (which is more like a large).  ThinkGeek has like 3 plus-size tees that are actually plus-size, a couple of skirts, and the rest of it is junior plus crap….this, despite pages of comments about how people would buy things if they came in a size that would fit.

Jeans:  Also Torrid.  (Don’t pay full price for anything there ever.)  Honestly, when they were having Black Friday/Haute Cash sales, I bought this pair and the non-premium pair, and I cannot tell the difference in fabric or fit. I actually had to check the tag to remember which pair it was. These are a 26 Regular…but not all the “regular” inseams are the same on the boyfriend jeans, so check before you order.

Shoes:  Classic Crocs. I just couldn’t with any other shoes today.  These are the “I really hurt” shoes.  They weigh nothing, they’re squishy with a little arch support, and they are ugly AF.  I wore them with striped fuzzy socks because my feet were cold this morning.

Necklace is my serotonin pendant, which is on a long chain because I didn’t have time to mess with it after I stared in my closet for 15 minutes. 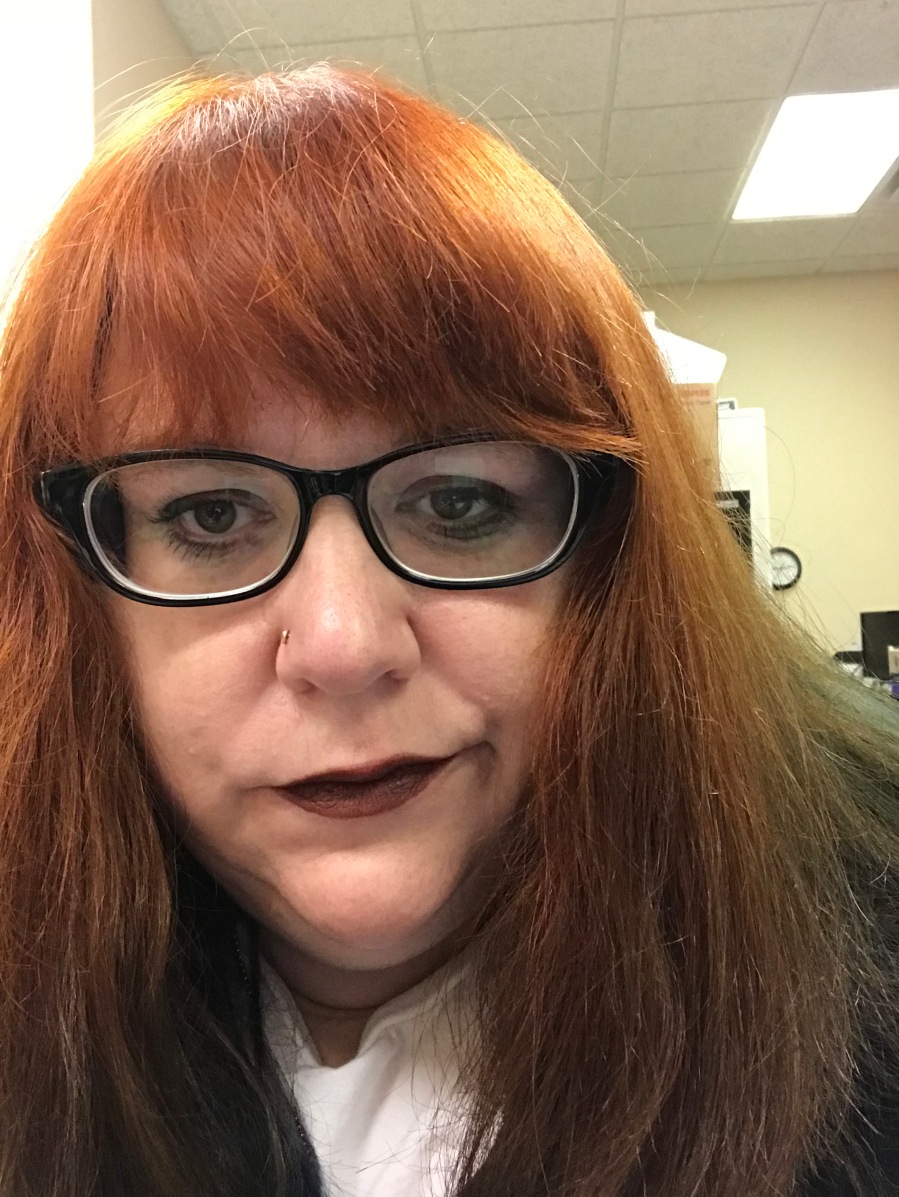 Lipstick is Colourpop in Pitch, which is a nice 90’s goth brown. I just wish it stayed on longer and went on a little more smoothly. But for $5.50, it isn’t a bad deal. I’ve tried some other products – their lipsticks are mostly decent, I like their blush, their eyeshadows are acceptable, but don’t buy their eyeliner pencils, they’re awful. The first time I tried to use it, it broke off four times. It’s too hard (even softening it with a lighter didn’t work), and given my devotion to Urban Decay and sometimes Stila – nope.

I’m trying to use blogging to break out of my “no one wants to see you” rut, but it’s hard, because some days, between depression and pain, I just really want people not to look at me. My glasses are part of this: I don’t really want people looking at my naked face. My hair is long because I want to hide behind it, and the crazy colors help people look at my hair and not me.

I’m trying to work up the energy to be seen again.