I know it’s Pi day, but frankly….I’ve always preferred cake (even if it’s a lie). 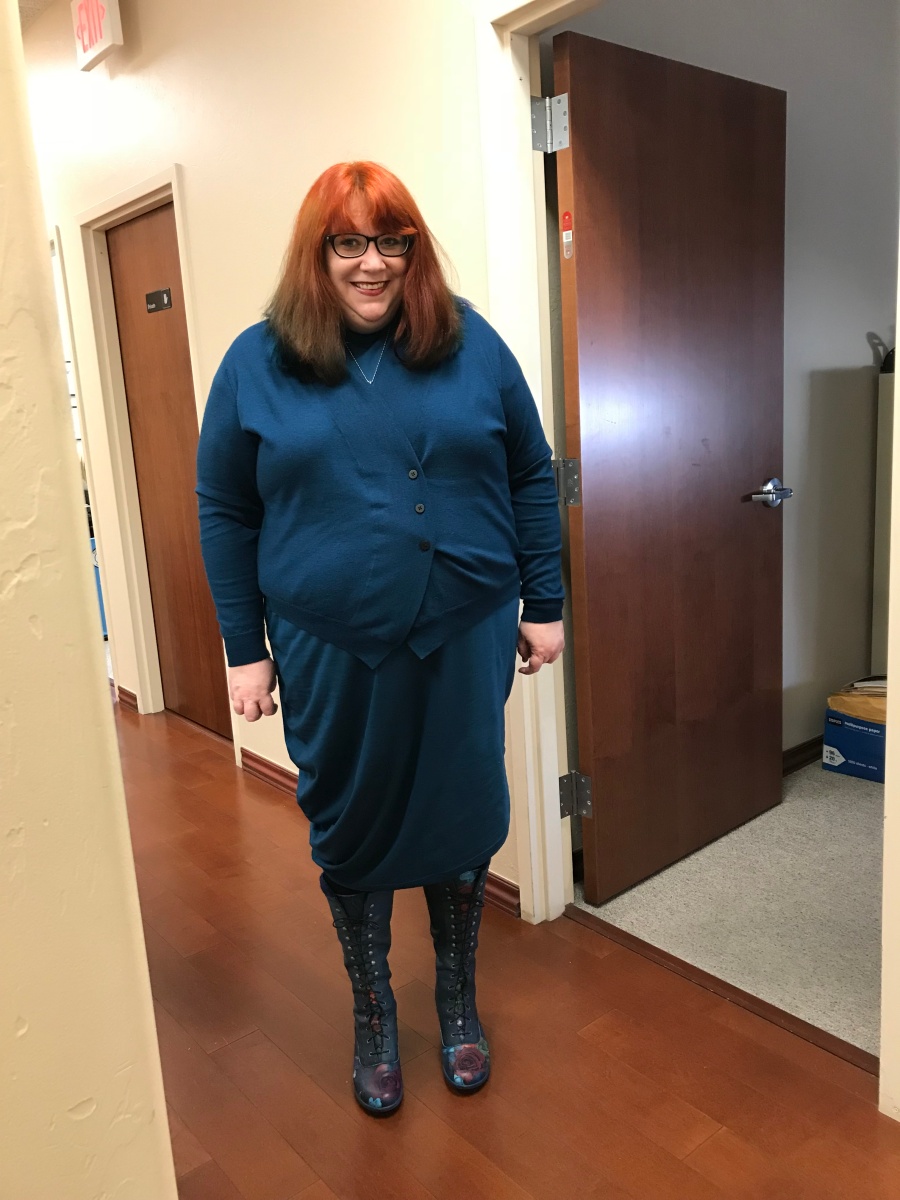 I posted this outfit on Instagram yesterday, but figured I would post some more details here.  The dress is the Geneva Dress in Marine from Universal Standard. The cardigan is from there, as well. Both are size XL (26/28).  The boots are the Fluevog Optimist in floral, which is still available in some sizes. I’m usually a 10.5, but in the Fluevogs I’ve tried, I’m pretty much an 11.5. If you don’t have a store near you (and of course there is not one in this red flyover shithole), the customer service reps on their chat were great. As far as the calf width goes, these are pretty roomy. I know they’re not laced to the top in the photo, but that’s because the laces are a little too short and I was wearing thicker leggings. My calves are about 17.25″, and there’s a lot more room. The tongue of the boot extends at least another inch on either side of the center. The only thing about these boots I DON’T like is the lack of zipper…you have to lace them. They do have speed-lacing hooks, but until they’re broken in a little, it’s kind of time-consuming.

Today, I was going to try to sport some extreme nerdwear in the form of my space cat dress, but this morning…I just wasn’t feeling it.  It’s warmer today, and I didn’t feel like wearing boots, or tights, or messing with that dress because it kind of doesn’t fit exactly perfect but SPACE CATS.

So I decided to bust out some overalls.  Again. 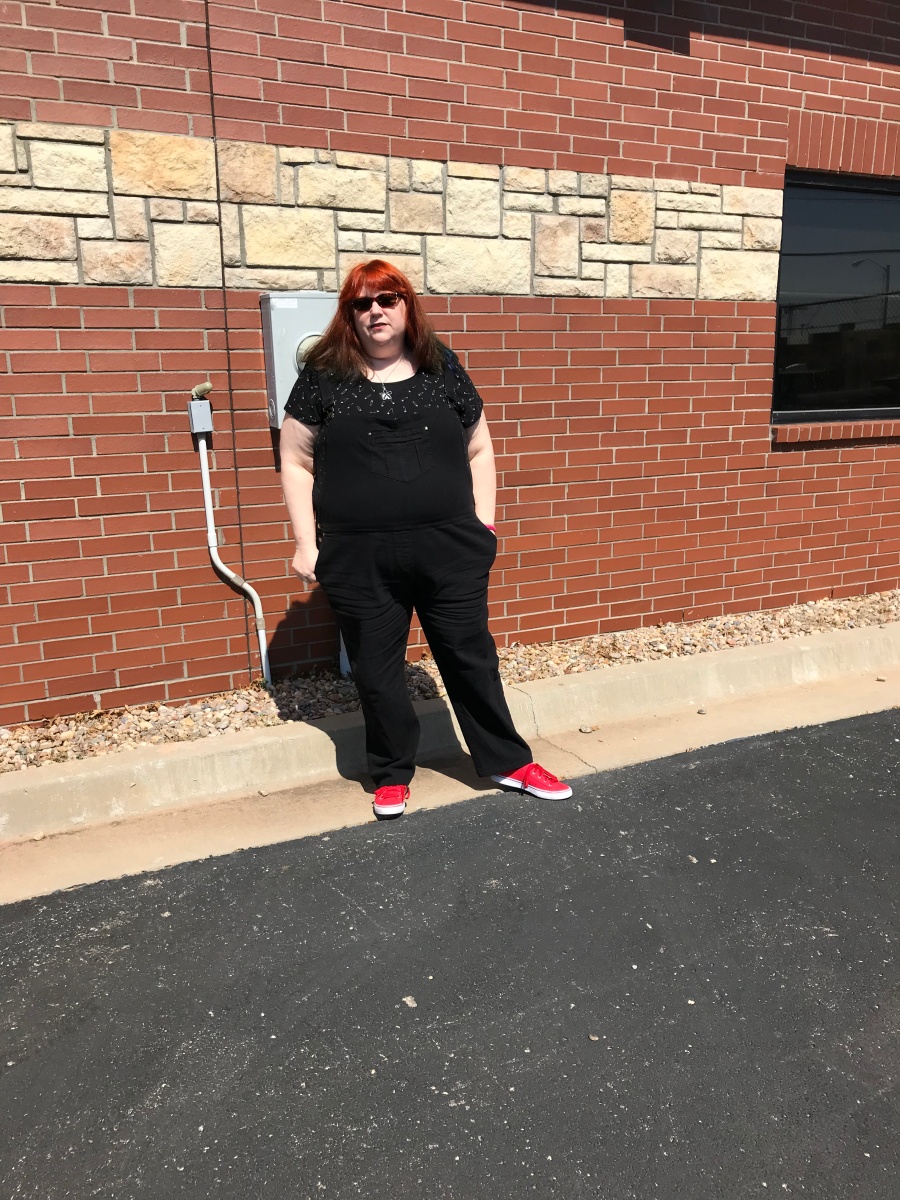 These particular overalls are from ASOS Curve, Size US 24, and were called “90’s Style Overalls.” When I first saw them, I wasn’t quite ready to recommit to overalls. I was still like, “you. You are no longer 25. You already have weird colors in your hair, and a nose ring, and a tattoo. Perhaps you should consider dressing like a grownup.” And then I was like…fuck that. Sure. There are times when I dress professionally. (See photo #1 in today’s post.) I wouldn’t go to a job interview in my overalls. (But I’ve done client meetings. My boss seriously gives negative fucks. I haven’t tried pajama pants yet, but I’ve considered it.)

I digress. The point is, these overalls are no longer available. I know, because I’ve been watching ASOS to see if they make some in regular denim. The Brooks Overalls are the closest thing available. I was actually on the verge of purchasing them when my size magically appeared at ASOS. I think the fabric is the same, based on the description from the US customer service department. They’re denim, but it’s that brushed denim that’s heavier and has sort of a…nap. Not quite like velour, but fuzzy. It also collects cat hair more effectively than my Scotch Brite Lint Brushes.

The T-shirt is from Torrid, and is still available in sizes 00 through 6 (I’m wearing a 4). It’s hard to tell from the pictures, but the safety pins are actually glittery silver. It’s a slub knit, so it’s a little lighter and more textured than their regular tees, and probably runs a little smaller…but not enough to size up. The only thing I don’t like about it is the stupid breast pocket. I hate breast pockets, especially the little decorative ones on women’s tee shirts. You can’t fit a pen, or your smokes (SHUT IT I KNOW IT’S BAD FOR YOU), or your phone, or anything else useful in it. Basically, it’s just an extra nip cover, assuming that’s even where your nip is.

My necklace is another of my favorites – a flower pendant from James Avery. Yes, they have a lot of Jesus Jewelry, but they also have some really cool stuff. This flower looks exactly like one of my “boring phone call” doodles, so I decided to give it to myself for my birthday a few years ago. I sometimes wear it on a longer chain (36″), but for work, that length smacks into my desk and then it ends up tucked down my shirt, so I’ve been using one of my shorter chains. I have 24″, 26″ and 30″ either stainless or sterling chains. I like the ones that are like old-school keychains…they don’t break as easily. I’ve broken so many 24″ necklaces trying to slip them over my giant head and/or forgotten they were around a collar and broken them when I immediately began shedding clothes after work. I didn’t think 26″ chains existed, but Amazon never lets me down. I’m wearing the 1.4mm 26″ chain in this picture (and the one from yesterday. And from the day before). It comes in a bunch of lengths. That’s one thing I do not like about jewelry: the necklaces are always too short. I have kind of a fat neck with a bump in the back (thanks mom & gramma), so the 18-20″ necklaces aren’t quite long enough. You can buy extender chains, or string together safety pins, which is fine if you’re wearing it under a collar or you have long hair to cover it, but if you’re more into short hair, that trick sucks. Therefore, I tend to look for pendants that I can put on different chains to suit my fashion needs. (And don’t even get me started on bracelets…my wrists aren’t super giant, but my hands evidently are, so I can’t get most bangles over my hands. (And all I can think of when I try is that chick in Gerald’s Game (the book) trying to get out of those handcuffs and well that pretty much kills bangles for me.) They just get in the way at work anyway.

My glasses are all from Zenni Optical. I’m very nearsighted (-6.75/-7.25), and I have to have the thin lenses. Buying them at LensMasters or EyeCrafters costs like $400. At Zenni, I can get like 5 or 6 pairs for that price. I’ve been wearing contacts since 8th grade, when I finally convinced my parents that I was mature enough not to wear glasses. However, the last few years, my allergies have been kinda nuts, which makes my eyes itch. So I decided to give the contacts a rest & try out some new glasses. These are the ones I have:

Retro-ish (My Coworker Called them “Scholarly”)

Black for How I Feel on the Inside

Wire Rims That My Mom Likes

I really love the frames for my sunglasses.  I’ve had them as regular glasses, both in the brown and in the blue: 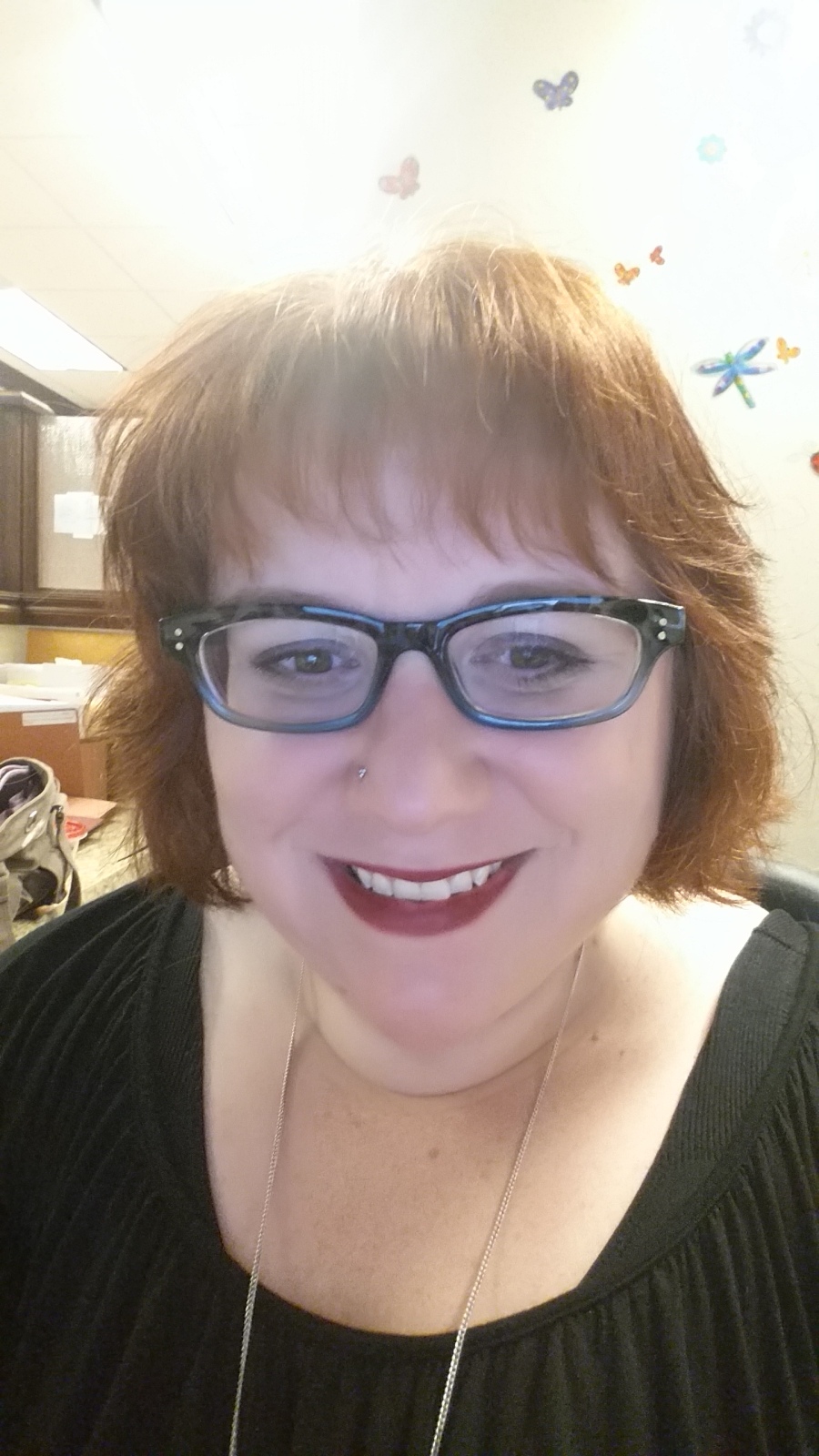 (Should I cut my hair short again? I’ll probably wait till fall. I like being able to just shove it up in a ponytail/bun in the summer. Plus, I think fall necklines look cuter with short hair.)

Finally, on to the footwear. I was going to wear my badass bitch boots again, but they’re not quite as broken in as I would like, and I wasn’t sure my feet could handle another day of them this week. So I decided to add a pop of color (only because I don’t have black tennis shoes and I couldn’t find my cat print Vans this morning) with my red Keds in a size 11. (I probably really do need a 10.5 in these, but they’re not too terribly long.) They’re fairly comfortable – this style actually has a little arch support. However, the original shoelaces that came with them broke pretty quickly. It came with white ones too, but I thought those looked too much like wanna-be Chucks and if I wanted Chucks, I would have bought them instead. Fortunately, Amazon also has many shoelaces.

So all three people who are reading this: what do you want to see? Hair? Makeup? More overalls (I have at least one more pair plus an overall skirt…when I want something, I want LOTS)? A count of exactly how many black items are in my closet? Me to stop with wall of text and post more pictures?

4 thoughts on “I felt so symbolic yesterday”